This genetically modified sugarcane could pump out cheaper biodiesel 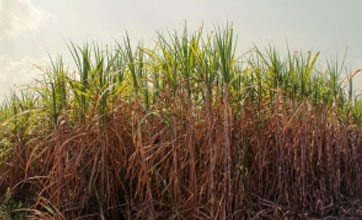 New research shows that sugarcane solves one of the biggest problems of biodiesel production—yield. When biodiesel fuel is made from soy, it produces a measly barrel of oil per acre of plant.

Compare that to a new genetically modified sugarcane plant, engineered by a team at the University of Illinois, which could eventually produce 17 barrels per acre.

This is all the more remarkable because sugarcane, as its name might suggest, doesn't produce much oil. In its natural form, the plant is only about 0.05% oil. But it does meet the team's other criteria—it's fast-growing, and it grows well on land not currently being used for food. Enter genetic engineering. "Within a year of starting the project, the team was able to boost oil production 20 times, to approximately 1%," says a story published by the University of Illinois.

The project is currently producing sugarcane that is 12% oil, and hopes to reach 20%. The variant, dubbed oilcane, is also built to be tolerant to cold and to photosynthesize more efficiently, leading to bigger plants and therefore even more oil.

"If all of the energy that goes into producing sugar instead goes into oil, then you could get 17 to 20 barrels of oil per acre," project lead Stephen Long said. "A crop like this could be producing biodiesel at a very competitive price."

The wonder-fuel has another sweet feature: it's still sugarcane, which means that the leftovers can be fermented and distilled into ethanol, another fuel source, one widely used in countries like Brazil, where all cars run on an ethanol-based mix.

Producing oil and ethanol from sugarcane uses existing, well-known technologies. And this means that it could be cheap to scale-up. Currently, soybean oil costs around $4.10 per gallon, whereas oilcane could manage $2.20 per gallon, making it a viable alternative at the pumps.

"We need to start building for a future when gas is no longer as low as $1.50 per gallon," says Long, "and we need to avoid any future dependency on other countries for our oil. We are lucky to have the land resources to do this."