U of I takes biomass research to D.C. 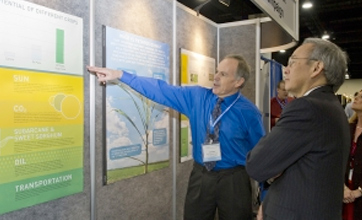 Chu, along with Secretary of Agriculture Tom Vilsack, also used the occasion to reappoint University of Illinois crop sciences professor Steve Long to the Federal Biomass Research and Development Technical Advisory Committee, which advises the secretaries on biomass energy research and development for the U.S.

The Illinois research, which was presented at the ARPA-E summit in Washington, D.C., is part of the agency’s Plants Engineered to Replace Oil program.

“This is one of [President Barack] Obama’s initiatives,” Long says. “It’s part of the American Recovery and Reinvestment Act and is designed to fund ambitious research projects that could fundamentally change the way the country uses and produces energy.”

Plants Engineered to Replace Oil, or PETRO, aims to genetically engineer a new class of crops that produce fuels that can be extracted directly from the plants.

Current biofuel production is limited because plants are inefficient in the way they capture solar energy and convert carbon dioxide from the atmosphere into fuel. PETRO projects are working to improve these processes by experimenting with various plants to create molecules already found in petroleum-based fuels.

Long is leading PETROSS, a project within PETRO that looks at sugar and sorghum. “I’ve worked on sugarcane since before my Ph.D.,” he notes.

U of I is the lead institution; the University of Florida, University of Nebraska and Brookhaven National Laboratory are subcontractors.

The goal of PETROSS is to genetically engineer sugarcane and sweet sorghum plants that make and accumulate oils in place of sugar in their stems. These two crops have been chosen because they are very productive, and there is a well-established infrastructure to grow and process them. They mature at different times, thus providing raw materials for biodiesel production for more months of the year than either crop alone. They are less demanding on soil quality and fertilizers and more drought-tolerant than grain crops.

The engineering of the plants is following several paths. To make photosynthesis more efficient, researchers are working on developing plants with lightercolored leaves, which allows leaves that are lower on the plant to get more light.

Researchers are also looking at ways to get more oil in the plant. They have identified a combination of five gene changes that increases the oil content of vegetative tissue almost 30 times, which they have engineered into the sugarcane and sweet sorghum with very promising initial results. They are looking for other genes that might, in combination with the ones they have found, give even better results.

To target oil production to the stem, they have identifi ed promoters that turn on genes in the mature stem, which will be coupled to the oil synthesis promotion genes and assembled into a single piece of DNA. The stacked genes can thus be introduced into the plant in a single transformation.

Finally, the researchers have successfully crossed cold-tolerant miscanthus with sugarcane and are now trying the same thing with sorghum. Up to now, sugarcane production has been limited to Hawaii, Florida and the southern half of the Gulf Coast states.

The hope is that these new crops, which can grow on marginal land and thus not compete with food production, will in the long term be stable, economically viable alternatives to petroleum, and have less of an environmental impact when manufactured and used.

ARPA-E estimates that, because of their high yields, they could deliver more than 10 times the amount of biodiesel produced per acre from soy and canola.