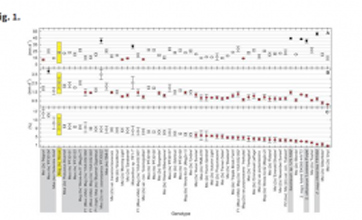 The goal of this study was to identify cold-tolerant genotypes within two species of Miscanthus related to the exceptionally chilling-tolerant C4 biomass crop accession: M. Å~giganteus ‘Illinois’ (Mxg) as well as in other Mxg genotypes. The ratio of leaf elongation at 10 ÅãC/5 ÅãC to that at 25 ÅãC/25 ÅãC was used to identify initially the 13 most promising Miscanthus genotypes out of 51 studied. Net leaf CO2 uptake (Asat) and the maximum operating efficiency of photosystem II (ФPSII) were measured in warm conditions (25 ÅãC/20 ÅãC), and then during and following a chilling treatment of 10 ÅãC/5 ÅãC for 11 d. Accessions of M. sacchariflorus (Msa) showed the smallest decline in leaf elongation on transfer to chilling conditions and did not differ significantly from Mxg, indicating greater chilling tolerance than diploid M. sinensis (Msi). Msa also showed the smallest reductions in Asat and ФPSII, and greater chilling-tolerant photosynthesis than Msi, and three other forms of Mxg, including new triploid accessions and a hexaploid Mxg ‘Illinois’. Tetraploid Msa ‘PF30153’ collected in Gifu Prefecture in Honshu, Japan did not differ significantly from Mxg ‘Illinois’ in leaf elongation and photosynthesis at low temperature, but was significantly superior to all other forms of Mxg tested. The results suggested that the exceptional chilling tolerance of Mxg ‘Illinois’ cannot be explained simply by the hybrid vigour of this intraspecific allotriploid. Selection of chilling-tolerant accessions from both of Mxg’s parental species, Msi and Msa, would be advisable for breeding new highly chilling-tolerant Mxg genotypes.