Can chilling tolerance of C4 photosynthesis in Miscanthus be transferred to sugarcane? 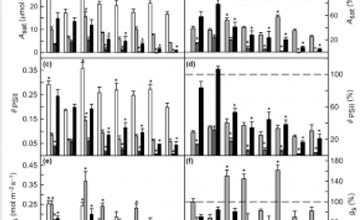 The goal of this study was to investigate if chilling tolerance of C4 photosynthesis in Miscanthus can be transferred to sugarcane by hybridization. Net leaf CO2 uptake (Asat) and the maximum operating efficiency of photosystem II (ФPSII) were measured in warm conditions (25 °C/20 °C), and then during and following a chilling treatment of 10 °C/5 °C for 11 d in controlled environment chambers. Two out of three hybrids (miscanes), ‘US 84-1058’ and ‘US 87-1019’, did not differ significantly from the chilling-tolerant M. ×giganteus ‘Illinois’ (Mxg), for Asat, and ΦPSII measured during chilling. For Mxg grown at 10 °C/5 °C for 11 days, Asat was 4.4 μmol m-2 s-1, while for miscane ‘US 84-1058’ and ‘US 87-1019’, Asat was 5.7 and 3.5 μmol m-2 s-1, respectively. Miscanes ‘US 84-1058’ and ‘US 87-1019’ and Mxg had significantly higher rates of Asat during chilling than three tested sugarcanes. A third miscane showed lower rates than Mxg during chilling, but recovered to higher rates than sugarcane upon return to warm conditions. Chilling tolerance of ‘US 84-1058’ was further confirmed under autumn field conditions in southern Illinois. The selected chilling tolerant miscanes have particular value for biomass feedstock and biofuel production and at the same time they can be a starting point for extending sugarcane's range to colder climates.