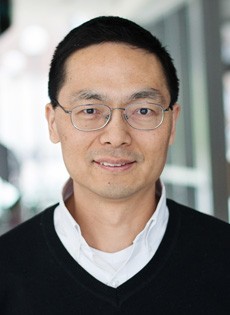 Professor Huimin Zhao is the Centennial Endowed Chair Professor of Chemical and Biomolecular Engineering at the University of Illinois. He received his B.S. in Biology from the University of Science and Technology of China and his Ph.D. from the California Institute of Technology. Prior to joining the University of Illinois, he was a project leader at the Industrial Biotechnology Laboratory of the Dow Chemical Company.  Huimin has received multiple awards, including the Guggenheim Fellowship being named a Fellow for the American Association for the Advancement of Science (AAAS). He has authored and co-authored 170 research articles and 20 issued and pending patent applications with several being licensed by industry.

Zhao is a leader in the use of directed evolution in combination with rational design to create proteins and biosynthetic pathways with novel functions, coupled with detailed biochemical characterizations. He developed the DNA Assembler Technique, an in vivo genetic method for rapid construction of biochemical pathways, which is used to build large constructs for the PETROSS project.