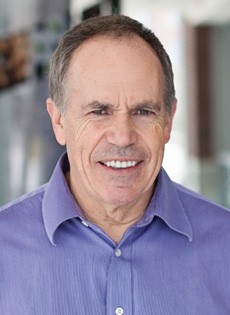 Director Steve Long is the Ikenberry Endowed Chair of Plant Biology and Crop Sciences at the University of Illinois. He is also a professor of crop sciences at Lancaster University, UK, and Newton-Abrahams Visiting Professor Elect at Oxford University. (Watch a brief video about his work.) His research spans from plant molecular biology and in silico crop design to field analysis of the performance of novel bioenergy crops and impacts of atmospheric change on food crops in the field. For the PETROSS program, he is developing theoretical frameworks and computational design tools for improving the efficiency of photosynthetic carbon metabolism and identifying practical transgenic strategies. Long is also the director of Realizing Increased Photosynthetic Efficiency (RIPE), ARPA-E-funded Transportation Energy Resource from Renewable Agriculture - Mobile Energy-Crop Phenotyping Platform (TERRA-MEPP), and co-director of Water Efficient Sorghum Technologies (WEST). He served as deputy director of the BP-funded Energy Biosciences Institute (EBI) until 2012.

Long has published papers in more than 300 peer-reviewed journals, including Nature and Science. He is a Fellow of the Royal Society and was recently listed as one of Thomson Reuters’ “Most Influential Scientific Minds of 2015.” His work has also been acknowledged with many awards, including the Marsh Award for Climate Change Research from the British Ecological Society, the Kettering Award from the American Society of Plant Biologists, and the Innovation Award of the International Society for Photosynthesis Research. He has given briefings on food security and bioenergy to the U.S. president, the Vatican, and to Bill Gates. He earned his bachelor’s in agriculture from Reading University and his doctorate in plant sciences from Leeds University.